OBJECTIVE:  Restoring the storied past of the JMT as America’s first and oldest recreational hiking trail.

OBJECTIVE:  Our first historic preservation project is to fund much needed repairs to the Muir Memorial Shelter, situated at the 12,000 foot Muir Pass, and to re-install the missing finial on its roof. The granite finial, an important “character-defining feature” of the stone hut, disappeared mysteriously after 1960.

The Conservancy’s first historic preservation project is to fund much needed repairs to the Muir Memorial Shelter, situated at the 12,000 foot Muir Pass, and to re-install the missing finial on its roof. We also propose consistent signage along the length of the John Muir Trail and a standing stone maker placed at its terminus in Yosemite Valley.

During the course of his research on the John Muir Memorial Shelter (AKA Muir Hut) for its nomination in July 2016 to the National Register of Historic Places, JMT Wilderness Conservancy Advisory Council member Doug Harnsberger located the original 1930 architectural plans of the Italian Trulli Hut inspired structure, as drawn by Berkeley architect Henry Gutterson, as well as a wealth of historic photographs taken by Sierra Club “High Trip” participants in the 1930’s. Originally the shelter featured a prominent finial at the apex of its stone roof. It is pictured below in a photograph of the 1933 dedication event with a young Ansel Adams standing in front with his tripod, capturing a portrait of the Sierra Club trip leader William Colby. 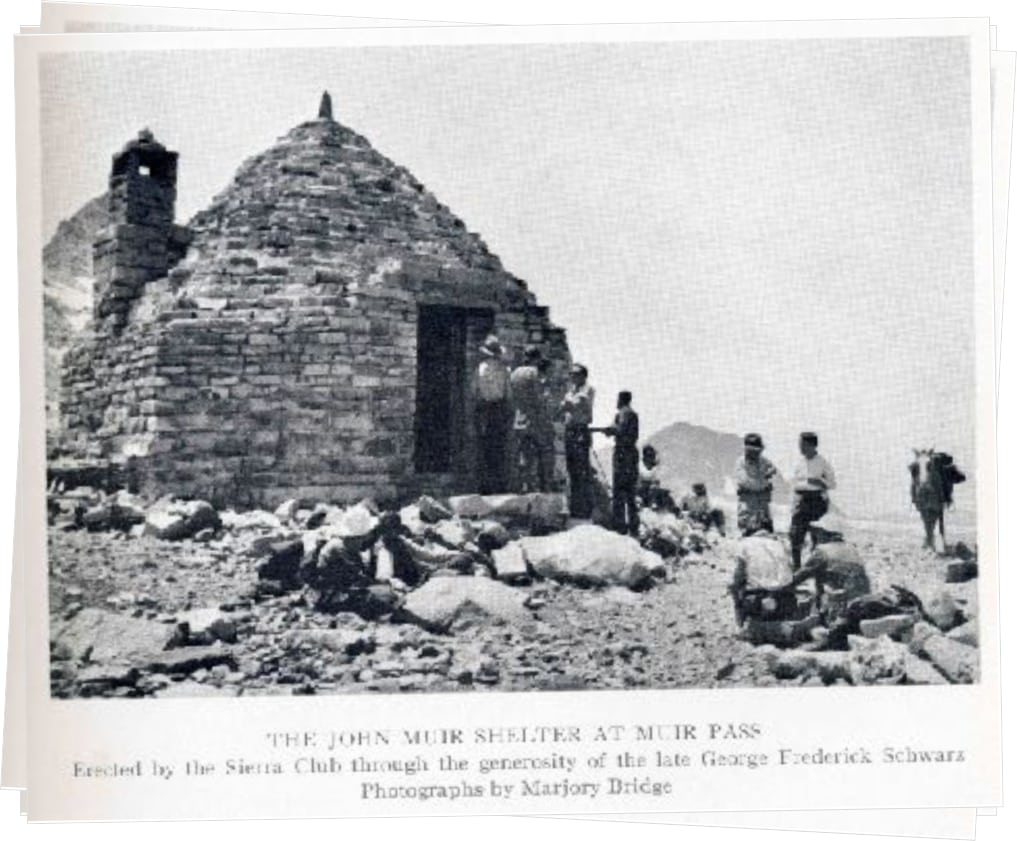 In addition to restoring the finial, the Muir Shelter needs to have its leaking corbelled granite roof re-pointed, its broken window replaced, and the entry door rehung on replacement hinges, after 90 years of constant use. Removing the accumulated grime, mold and mildew from the interior chamber is also on the “must-do” maintenance list!

The Conservancy is waiting for approvals from SEKI and seeks to have this work done in the next few seasons.  The scope and details of the proposed restoration work is being coordinated with the Cultural Resource Officer at the Sequoia and Kings Canyon National Parks headquarters. The restoration work will be reviewed and approved to be in compliance with the Secretary of the Interior’s “Standards for Restoration” as required for all National Park owned historic structures.

The Conservancy would like to commemorate the terminus of the John Muir Trail with a Standing Stone marker in Yosemite Valley. 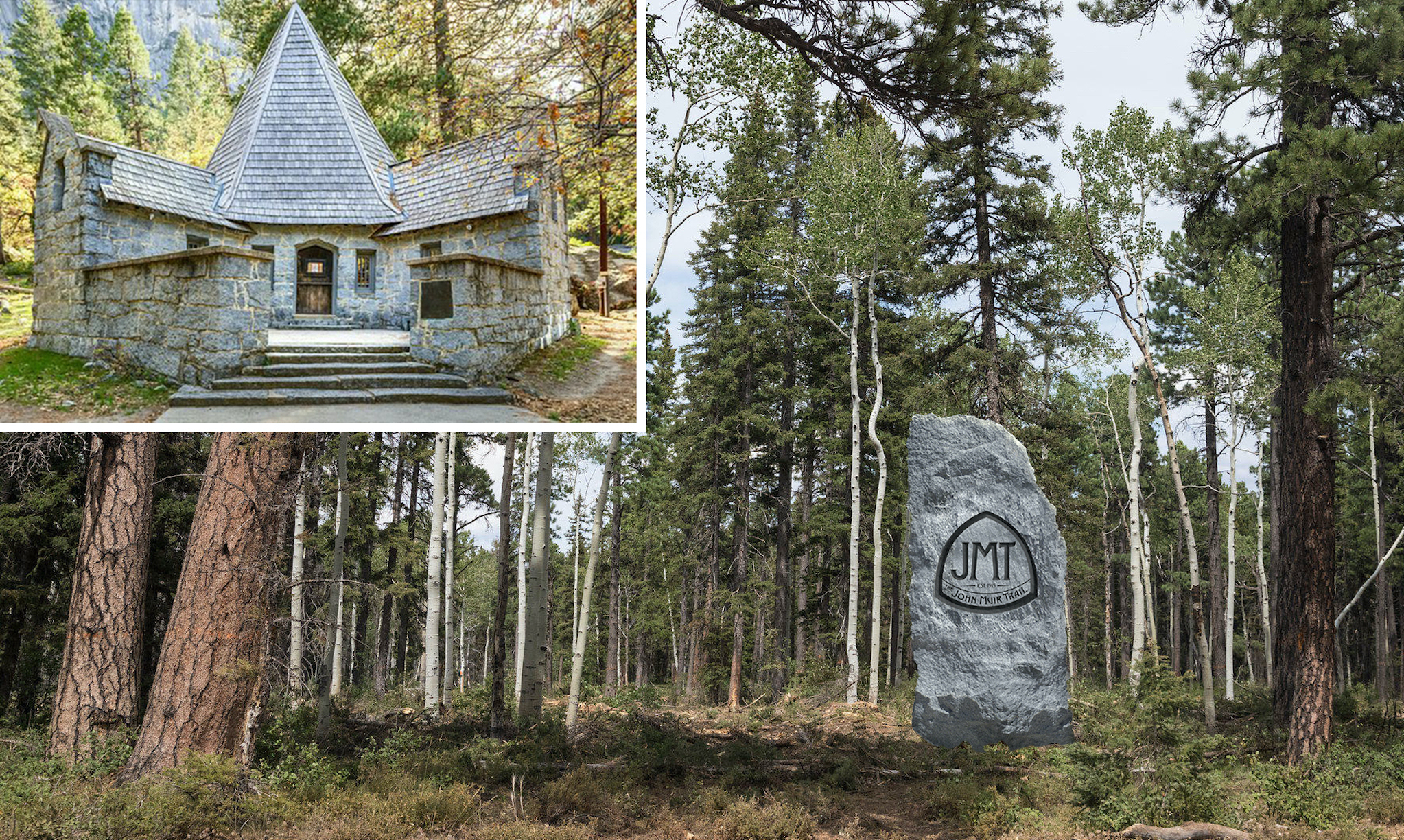 Most national scenic trails have a marker erected at the starting and ending points of the trail. We at the JMT Wilderness Conservancy believe that the John Muir Trail, the oldest recreational trail in American history, deserves this kind of permanent recognition. The Standing Stone marker would be placed in a location consistent with the history and spirit of the JMT, somewhere in the vicinity of the Yosemite Conservation Heritage Center, a National Historic Landmark formerly known as the Leconte Memorial Lodge. Built in 1903 of natural granite with a high steeply-pitched ceiling and rough hewn trusses, the Lodge is a gem of Tudor Revival architecture.  One of the earliest structures built in what later became the National Park Service, the Lodge served as the first visitor’s center in Yosemite Valley and was an early Valley residence of Ansel Adams.  William Colby identified the Lodge as the intended and spiritual starting point of the John Muir Trail in an interview he gave in 1960, recorded and in the archives of Bancroft Library. For this standing stone we chose a natural-cleft Sierra White granite, a favorite indigenous stone of early Sierra Club members and JMT explorers.

Marking the Historic Identity of the JMT

We propose consistent markers along the length of the John Muir Trail, so people will plainly see they are hiking on the historic JMT.

Among the historic signs on the John Muir Trail, vitreous enamel signs were in wide use from 1880 to 1950. The sign atop Whitney placed in September 1930 to commemorate the High Sierra Trail is green on white enamel, as are many other historic signs found throughout the Sierra. The Conservancy would like to restore this heritage of JMT signage and have identified a font from a 1920’s Yosemite poster as a potential model for lettering. Above is an example for a simple marker that could be affixed to the existing signage or a nearby tree along the length of the trail.

We believe this signage would greatly enhance the experience of walking this trail and would assure the John Muir Trail’s unique place as America’s oldest recreational trail. The JMT Wilderness Conservancy will be reviewing all signage options with the U.S. Forest Service and the NPS with both design and installation in mind, and will provide updates as we go forward.